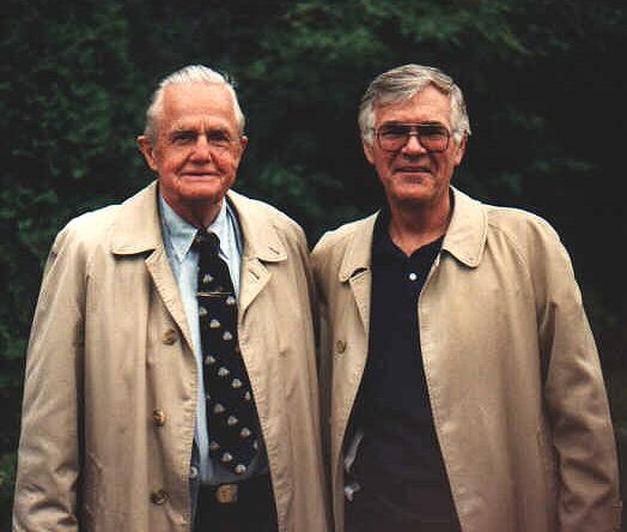 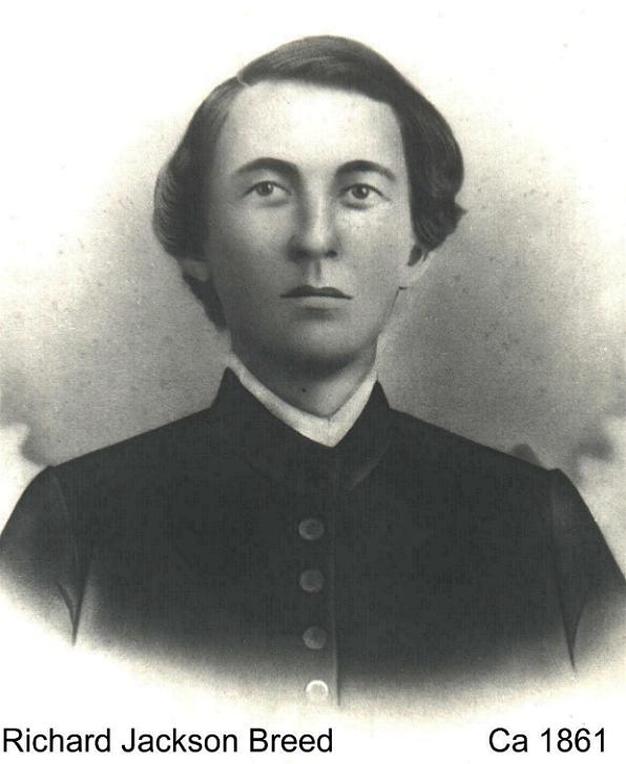 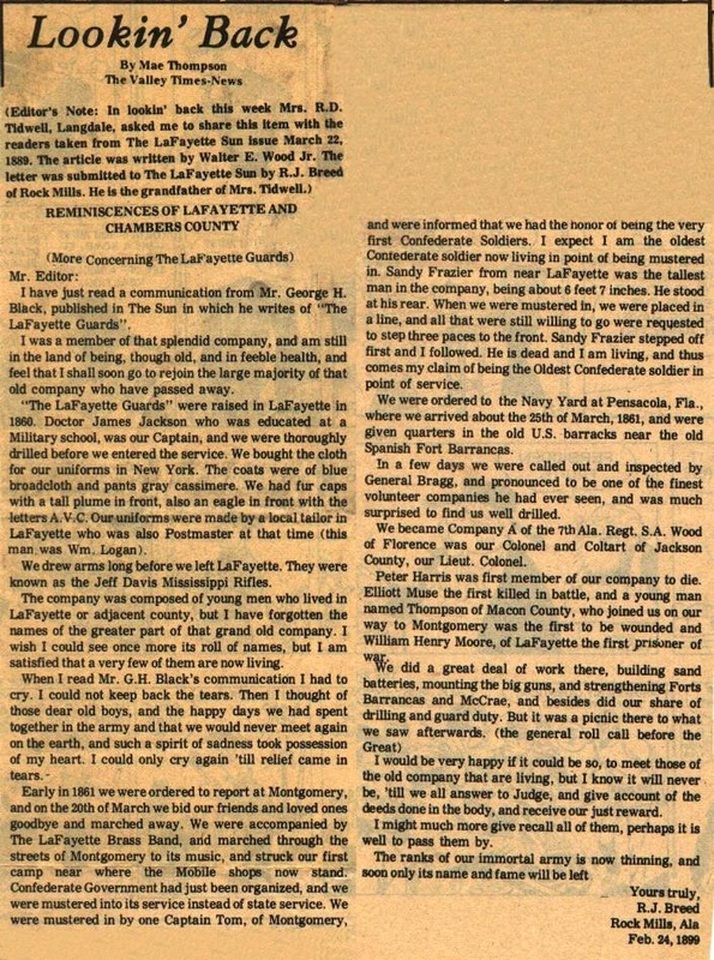 J.W.BREED -Private-Member of Capt. Larkin Breed's Co.F,
Randolph County, Alabama Militia, Col. Faulkner's Battallion
Mounted Infantry, 1st Alabama Reserves, also Co.I 62nd Alabama
Infantry. He was born in Randolph County, Alabama and joined
the service at age 16. He was a light complected farmer between
5 ft. 7 in. and 5 ft. 9 in. tall, with blue eyes and light
colored hair. His name appears on the supplemental roll the
20th of October 1864 in Wedowee, Alabama; his name also
appears on the muster roll the 17th of November 1864.

LARKIN BREED -Private -Appears on the muster roll in February
1864, Roanoke, Randolph Co., Ala. a member of W.M.McClendon's
Co. Randolph County Reserves. Also appears on the muster roll
the 17th of November 1864 as Capt. in Larkin Breed's Co. F,
Randolph County Militia; Col. Faulkner's Battallion Mounted
infantry. He was born in Georgia and his age is listed as 40
and 41. He was 6 ft. tall with with blue eyes, dark hair and
dark complexion. He was Sheriff of Randolph County, Alabama
and as such had a military service exemption from 1861 to 1865.

RICHARD JACKSON BREED -Private in Capt. James W. Jackson's
Co.A. of the 7th Regt. of 12 month Volunteers, Alabama.
Born in Shelby Co., Ala. Age 22, 6ft. 2.5 in. tall, light
complected, blue eyes, dark hair and by profession a store
clerk. Enlisted at LaFayette, Chambers Co., Ala. on the 15th
day of March, 1861. Discharged 25th day of July, 1861 for
medical reasons. Re-enlisted the 1st of September, 1861 was
corporal of instruction at Talladega, Ala. Served in Co. I
28th Alabama Infantry; was wounded and captured the 23rd day
of November 1863 in the Battle of Missonary Ridge, Chattanooga,
Tenn. His application for pension says he was wounded by the
bursting of a shell. Was knocked down and hurt in the chest.
He was sent from Missionary Ridge to Louisville, Ky. and on the
3rd of December 1863 he was sent to Rock Island Barracks
Illinois. He was transferred from Rock Island, Illinois the 25th
of February 1865 for the purpose of exchange of prisoners.
He was received at General Hospital No. 9, Richmond, Va.
the 5th of March 1865.

RICHARD N. (NEWTON) BREED -Private-Capt.Larkin Breed's Co. F
Randolph Co., Alabama Militia, Col. Faulkner's Battalion Mounted
Infantry (Talladega Co. Reserves) between age 44 and 45, born
in Monroe Co., Ga., height between 5ft.10in. and 6ft. His eyes
were blue and his hair was gray. Complexion is listed as both
fair and dark. His occupation was farmer. His name appears on
the supplemental roll the 20th of October, 1864 in Wedowee, Ala.
His name appears on the muster roll the 17th of Nov. 1864.

W.(WILLIAM) A.(AVERY) BREED -Private-Larkin Breeds Co.F
Randolph Co. Alabama Militia, part of Col.Falkner's Battalion
Mounted Infantry, later known as Talladega County Reserves,
listed as part of Hightowers Company Alabama Militia under M.M.
Robinson Regt. on Nov.4th 1864 at Brooksville, Ala. W.A. is
listed as being 16 years of age. He was born in Alabama, dark
complected, dark eyes and hair.. He was 5ft.7in tall and farmer
before the war. He enlisted at Brooksville, Alabama in August
of 1864; he appears on the muster roll the 17th of November
1864 and the 20th of June 1865 at Talladega, Alabama. He was
captured and later pardoned at Talladega, Ala. on 30th May 1865.
He was discharged in June of 1865. His name appears on the Tax
Assessors Census of Randolph Co. Ala. in in 1907.

WILLIAM B. BREED -Private-Capt. Falkner's Chambers Co. Ala.
Calvary later assigned to Co.B Wade's 8th Confederate Calvary
(2nd Regt. Miss.& Ala. Calvary) He was 18 years of age. His
father was William J. Breed of Randolph Co. Ala. William B.
enlisted the 25th of July 1861 in Chamber Co. Ala. and his
name appears on the muster roll the 3rd of August 1861 at
West Point, Ga. He later appears on the muster roll at Camp
Bauregard, Ky. the 31st Oct.1861. He filed a claim the 2nd of
May 1863 on the 2nd.audit of the Confederate States Treasury.

W.(WILLIAM)J.(JASPER) BREED -Private-Capt.Larkins Co. F
Randolph County Alabama Local Defense affilliated Col.Falkners
Battalion Mounted Infantry (Talladega Co. Ala. Reserves)
He was 52 years of age being born in Georgia 19th June 1813
He was dark complected with gray hair and blue eyes. He was a
farmer by occupation and 6ft.3in. tall. His name appears on
the muster roll the 17th of November 1864.

*Formed by the consolidation of the 19th Battallion Georgia
Calvary and the 5th Battallion of Hillards Legion, Alabama
Volunteers Calvary.

This list of Breeds who were members of the Confederate Army
was compiled by Kermit Lewis Breed, great, great grandson of
Richard Jackson Breed and is taken from the infromation
available in the Consolidated List of Confederate Soldiers,
National Archieves and the records available at the Alabama
State Archieves Montgomery, Alabama. The author would appreciate
any information pertaining to Confederate or Union soldier
having the surname Breed.
UA-34095988-1